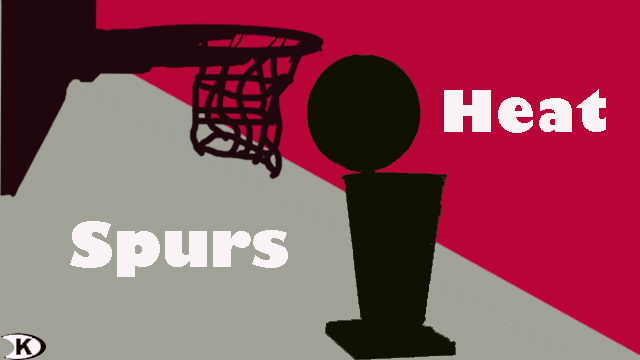 After tonight, the 2013 NBA Champion will forever be engrained in history as either the San Antonio Spurs or the Miami Heat. The collective memory will remember the heroes on the side of the victor and the feats of the losing team will fade. In the Hall of Fame someday, this series will be seen as either Tim Duncan’s (presumed) final triumph or a key stepping stone in LeBron James’ quest to end up on the list of all-time stars. This Game 7 holds so much weight for both teams.

Spur of the Moment

If the Spurs win… Tim Duncan will have five championships, matching Kobe Bryant in rings, but passing him in longevity between wins. Duncan would become the greatest player of the post-Michael Jordan generation until LeBron James properly challenges him. For Manu Ginobli, he may be ready to hang his number from the rafters. Greg Poppovich’s five rings would tie him for third all time with Pat Riley and John Kundla.

With a championship, this season would serve as a makeover for the Spurs’ image. The boring team from San Antonio is no more, with the high paced action of these games. I feel like in hindsight, the Spurs could lose this largely unfair label forever. The Spurs previous championship teams were no more boring than the consistently underwhelming Eastern Conference basketball played during the regular season. The label was really only cemented because those Spurs teams were not the thrill ride of the Kobe Bryant-Shaquille O’Neal Los Angeles Lakers.

If the Spurs lose… this may be the end of the line for the franchise, but it is more likely the team will continue to compete. Tony Parker still has some good years in him as he’s finally recognized as one of the league’s best point guard,s while Danny Green and Kawhi Leonard are going to be quite the supporting cast. However, the road becomes more and more difficult considering the power centered in the West and the moving parts in Chris Paul and Dwight Howard.

Heat of the Moment

If the Heat win… they’re setting themselves up for a nice little dynasty run. With the Eastern Conference belonging to Miami,  a likely third straight championship run next year would end a great Big Three experiment (although the Indiana Pacers and Chicago Bulls will only be better next year). LeBron James finishes up one of the most dominating NBA seasons with a ring and Finals MVP, while Dwyane Wade and Chris Bosh can duck criticism.

If the Heat lose… all hell breaks loose. LeBron James will suddenly be 1-3 in the NBA Finals. Also, remember how last year was a lockout shortened season? Look for that argument to be resurrected as to why the Heat were able to overcome their obstacles to win a title. LeBron James, even if he scores 50 points in game 7, will be seen as a player that can’t rise to the occasion of the biggest stage.

A loss almost assures the breakup of the big three, with the criticism that would be leveraged against Dwyane Wade and Chris Bosh. With the summer of 2014 and a partial breakup necessary, Heat President Pat Riley will have to make bold moves to give Miami a chance to keep LeBron. Could Dwyane Wade have foreseen a scenario where he was auctioned off the team he built when LeBron signed? That suddenly becomes a possibility.

South Beach Party or March Back to the Alamo

With all of these factors in play, this is a must win game for the legacy of the Heat. The Spurs were never supposed to make it back to a championship. While a loss will be disappointing and Game 6 will forever haunt San Antonio fans, the legacy of their big three in Ginobli, Parker and Duncan is safe. A loss for the Heat tonight and the “Big Three” experiment becomes a failure in the short term.

Check out: Off the Post: Miami Heat Fans Promised Pizza Party with Re-Entry