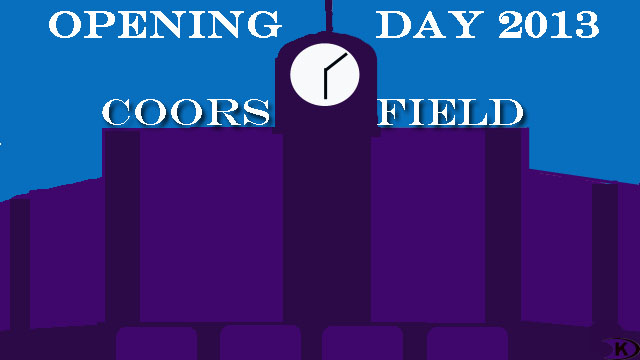 On MLB Opening Day 2013, the Colorado Rockies do not have the look of a Division Champion. In breaking down the optimism that surrounds the club each spring, this team presents an interesting case.

Opening Day is the eternal day of hope and optimism for baseball fans. This idea remains true even for the Colorado Rockies, who open their 2013 season first in Wisconsin against the Milwaukee Brewers before breaking the seal on the Coors Field season Friday in Denver. Ignoring the Rockies’ 98-loss season of 2012, there are plenty of reasons to be excited for 2013. Right Rockies fans?

Here’s a sobering fact. This is Opening Day 21 for the Rockies and not one of the previous seasons has ended with a division championship. The success the Rockies are blindly trying to achieve is rooted in three wild card playoff berths, two playoff series wins in Rocktober 2007, and a lot of luck. The charms of this team in spring training and likely early in this season will blow over as they do every year, left with excuses and finger pointing. The first strike against the Rockies is again their pitching staff

The Rockies pitching was terrible last year, at some points challenging to steal the worst earned run average in baseball history from a Philadelphia Phillies team from early last century. Adding to the inadequacy, the Rockies made their own team a mockery in Major League Baseball by implement a 75-pitch count limit and a rotation “piggy back” system of relievers.

If by some chance the Rockies pitching does magically correct itself despite management doing nothing in the offseason to seriously address the problem, that still will not solve the team’s many entrenched problems. However, there is a belief, permeated from the Rockies, that buried beneath the trash on the mound last season is a hitting line up with the potential to be the best in the National League. Sidekick bats of Dexter Fowler, Wilin Rosario and Josh Rutledge aid the potential Blake Street Bombers Carlos Gonzalez, Troy Tulowitzki, Todd Helton and Michael Cuddyer.

Without looking at the Jekyll and Hyde home-road splits, that thinking could be true. The Rockies batting average on the road was .241, 26th in baseball and they hit the third fewest home runs in the league away from Coors Field. Their league leading batting average was based on overinflated Denver numbers, .306 at home, where they still only won 43 percent of their games The Rockies also committed a league worst 122 errors last year or over two per series.

Dante Bichette, former Blake Street Bomber and newest Rockies hitting coachm believes that he can “try some things” to even the large variance in batting averages. The Rockies promoted Bichette without testing his methods at altitude, say with the Colorado Springs AAA affiliate Sky Sox. The Rockies also have a manager in Walt Weiss who believes in practicing the fundamentals of baseball, which should erase the rockslide of last season. Both men will have to look over their shoulder at the master of ceremonies, Bill Geivett, the Rockies assistant who has led the PR battle by saying new management will solve the Rockies problems.

Back to the question at hand, what is the best case scenario for Rockies fans entering Opening Day? Ask around and a .500 season would be a success for many fans, but obviously the Rockies were so bad last year that any improvement over last year’s 64 wins would be seen as positive. This low bar set by Rockies faithful and their management gives every reason for optimism. The Rockies can easily win more than 35 games at home next year and more success will follow.

Additionally, the Rockies have a number of other quantifiable factors on their side. Almost every player on the roster was hurt at some point last year. They have replaced their 49-year-old starting pitcher Jamie Moyer with 33-year old Jon Garland, who pitched nine games in 2011 with only one win. That’s right, he did not play last year. Young players Jordan Pacheco, Wilin Rosario and Josh Rutledge’s defense will improve. Additionally, last year was a strange season at Coors Field where the humidor did not seem to work. The current team abandoned the problems of Jim Tracy, the piggyback system and pitching prospect Alex White. Finally, Colorado turned down my friend Aaron Davidson as the backup Dinger because he was too short, so they are honestly making better personnel decisions.

These arguments of twisted logic make the Rockies Opening Day so fitting. The Rockies make the baseball fans Denver seem like April Fools each year. When a division championship defines real regular season success, the Rockies have none. Two decades later and fans rightly flock to the ballpark in purple and observe the best summer atmosphere in the city, but maybe it’s time to lose a little of that eternal optimism. After Opening Day of course.

One thought on “Colorado Rockies: The Purple Haze of Opening Day Optimism”